How Land Surveying Influenced One of America’s Favorite Poet & Essayists 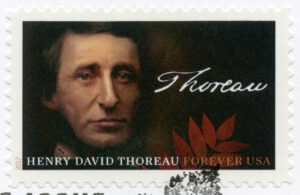 Many prominent people have gotten their start or dabbled in the art of land surveying. As we’ve covered in previous posts, well-known American figures have connected with the land through the art of land surveying. The work is ideal for those who see the beauty of the natural world. During the mid 19th century, America produced many memorable poets and writers that were essential in articulating and refining the American ethos and the philosophies of the New World. One name that is synonymous with harmonious living in the natural world — particularly as technology and cities began to grow— was Henry David Thoreau, known as an American environmental writer and essayist. When he wasn’t philosophizing and thinking profoundly about man’s relationship to nature, Thoreau was working as a land surveyor.

Classical education in American history will likely come across the likes of Massachusetts native Henry David Thoreau and his work. With such well-composed life advice and profound thinking, Thoreau was known for his thoughts on capitalism, nature, and the individual. The son of a pencil factory owner, Thoreau became an apprentice to Ralph Walde Emerson—another big name in American literature. This meant that young Thoreau would be heavily steeped in the Transcendental tradition of his mentor. For the Transcendentalist, the way to a meaningful life was in the ability to hold oneself or maintain one’s separation from the material world and material wealth. This was an American delineation of the British Romantics, who saw the natural world as the arbiter towards spiritual transcendence and peace.  Emerson wrote, “Mind is the only reality, of which all other natures are better or worse reflectors. Nature, literature, history, are only subjective phenomena.” This type of transcendentalist thinking was to inform much of Thoreau’s work, although he would depart from heavily discounting the power of nature on individual development. On the contrary, Thoreau put a lot more significance on nature and its presence in our lives.

A Young Land Surveyor Uses Surveying to Inform His Work

As Thoreau worked parceling land that would be sold off to loggers. He used land surveying as his day job and dedicated himself to writing on his time off. He became Concord’s head surveyor in 1851. A close look at land surveying of the 19th century reveals that there were no licensing requirements to do the work. So land surveyors relied heavily on recommendations and their past work to vouch for them. Thorough was a man known in the surveying community as a man of integrity and this fared well for his ability to continue getting work.

The US Coast Survey formed in 1807 was important for the young land surveyor. The survey was conducted under the public spotlight and brought questions to the forefront about the role of science in democracy. These early surveys often had a significant impact on the shaping of society and people’s understanding of private property in the early days of the nation.

The century has many important people working as land surveyors, but the work itself — done across the country — would help shape so much of America today. One of the most famous texts was the 18th-century treatise called “The Complete Surveyor or the Whole Art of Surveying Land.” This book was influential for other early surveyors including George Washington and Henry David Thoreau. The process of land surveying looked a little like this:

The Long Tradition of Land Surveying in America

These figures have included the first president of the United States, George Washington, and founding father Thomas Jefferson. We have also covered the Lewis and Clarke expedition that gave way to a better understanding of the American Western frontier. The Lewis and Clarke expedition helped the American expansion efforts. In Europe at this time, land surveying would use a lot of transits, theodolites, and star charts, early surveying in the colonies used a different method that involved a long Gunter’s Chain to measure and demarcate the property. Most of the land surveyed east of the Ohio River was done using this method.

Land Surveying You Can Trust in the El Paso Area

As one of the Southwest’s most dependable land surveying firms, we are ready to help you survey your land with accuracy and reliability. Call us today and find out more about what we do.