Land Surveyors: The Enigmatic Nature of Mapping Out Our World 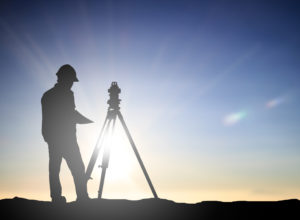 Land surveyors keep an ancient tradition alive. It’s true, land surveying extends far beyond the physical infrastructure. Everyone knows that the world is ‘connected’ today. When we use this phrase we usually refer to digital connections or avenues of communication across borders and oceans via social media sites or websites or access to the same or similar information. And while all that is true—that the world is figuratively more connected than ever—it is also true that there is physical work that is done in order to make these ‘connections’ possible. At the same time, the construction work we see on our way to work, the roadblocks that have us follow detours, all begin with an understanding of the land that is being built on, manipulated, changed. The work before the work is, in some ways, what makes land surveyors enigmatic and somewhat mysterious.

The Building Blocks—Geometry and Ancient Civilizations

Let’s take a step back in time. The concept of surveying or inspecting the land goes way back into civilizations. The division, understanding, and assessment of land serves many purposes and was used as far back as the ancient Egyptians for the purpose of taxation. Early surveys, used different types of instruments to gauge the dimensions of plots of land. According to Purdue University, in 120 B.C the Greeks developed geometry, although there were early versions of it in Egypt. Interestingly enough, the word Geometry means to ‘measure the earth’ and is the science of shape and size of things. Naturally, the science was then used to divide the land into shapes and plots, especially as civilizations grew, governments were established, and personal property needed to be measured and, yes, of course, taxed.

It was in Greece that the first piece of surveying equipment was developed. This was called the Diopter. This instrument was a mobile tool that used a cogwheel and water level to measure terrestrial and astronomical figures on a property. With this tool, the Greeks also developed a standardized method for surveying and basically created a protocol that set the stage for the process for many years.

And on to Europe and then the Industrial Revolution

You might remember a word or two about William the Conqueror from early history classes. Also affectionately known as William the Bastard, as his illegitimate birth was certainly a topic of conversation among royalty circles during his reign (his father impregnated a mistress), he ruled England from the time he was eight years old. Interestingly enough, William the Bastard’s reign was plagued with violence and turmoil, but he managed to maintain control and—despite not knowing English and being illiterate— made great contributions to the development of the English language in early England. He also made a great contribution to land surveying when he ordered a “Domesday Book,” a record of people who owned land in England and the sizes and shapes of their plots. This book placed a great emphasis on demarcating privately owned land and property.

The demarcation of personal property today—and if you are a property owner, then you are highly aware of this— is key in maintaining order and proper city records and plots. In 1571, the first theodolite was created. This was a more precise instrument, as compared with the diopter that came before it. The setup uses a tripod with a compass and is able to create boundary lines. It wasn’t until the 18th century, however, that plots of land began being measured with precise maps of where each was located.

In the 1800s, land surveying became an actual profession. And as the surveying tools improved, the process became more and more important. This was largely due to the rapid increase in population and the growth of cities, roads, and railways. Suddenly surveying land and understanding the landscape on which we built was much more of a necessity.

You ask most people what the role of land surveyors is and they might come up with a relatively good educated guess. Most folks, however, know little about the process or understand that it is present before anything can get built. It’s why the surveyor is a kind of ghostly and enigmatic figure that comes in before the groundbreaking begins and plots out the land and territory.

Still in the 20th and 21st centuries, land surveying uses the same basic principles and concepts that were started centuries ago. The development of certain technologies, such as GPS, laser cameras, precision instruments, GIS software, and terrestrial scanning makes everything that much more accurate and efficient.

Surveying the Seas: Internet Cables that Run Our Online World

Another way that these surveying concepts are at work is through the network of cables that connect us all. As the internet has expanded, so has the infrastructure that supports it—even though it’s not often visible. It’s just another arena where the concepts and tools of land surveyors come into play. Fiber optic cable is laid out across the ocean floor to help connect people online. This is often referred to as the secret network that connects the world. It used to be that communications happened through copper cables and electrical signals. Today fiber optic cable that is laid across the land and ocean floor allows for the faster and secure communication we enjoy today. These fiber optic cables are often as thick as a human hair and carry pulses of late that transfer data.

At Land-Mark, we take the art of surveying very seriously. We have been in the business for many years and focus on providing accurate readings and maps of the land in question. Whether it is a government contract or a private enterprise looking for their next commercial location, accurate readings of property markings and coordinates are key in protecting yourself down the road from any legal troubles.