The Evolution of GPS Technology and How It Affected Land Surveying 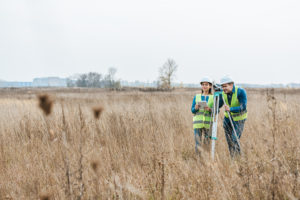 We live in the age of information. We all probably hear this phrase on a regular basis and are made of aware of this fact again and again when we encounter— and have immediate access to — endless bits of information and media and entertainment. Land surveying involves the gathering of information and data. The world of GPS has also significantly changed the way we travel and move around, as well as the way we understand the terrain. Many people now depend on GPS to get around. As land surveyors, GPS technology has impacted the way we do our work as well.

For centuries, scientists aimed to devise a way to enhance and improve our navigation and improve our ability to pinpoint our position in the world with accuracy. That technology exists today and most of us hardly give it a second thought.

The Beginning of the Technology

The GPS technology has so steadily snuck its way into our cars, our phones, and our lives. It has its origins in the Sputnik era. Scientists were able to track the satellites with shifts in their radio signals. This is known as the Doppler Effect. Throughout the 1960s the United States Navy conducted experiments to track submarines carrying nuclear missiles. In the 70s, the Department of Defense used some of this Navy technology and continued the movement of using satellites to track movement and for sophisticated navigation systems.

The DoD launched its first Navigation System with Timing and Ranging (NAVSTAR) satellite in 1978. By 1993, the 24 satellite system that GPS uses today was pretty much operational. There are two levels of service: the Standard Positioning Service and Precise Positioning Service. Access to the latter is restricted to the U.S Armed Forces. The former is the one most people know today as the GPS utilized by everyone.

So who created this technology and who do we credit as the inventor? After all, we always want to put a face to the name, even though some of the inventors we credit are not often the ones that deserve all the credit. Thomas Edison, for example, gets all the credit for the light bulb, but Humphry Davy might have something to say about that.

When it comes to GPS technology, there are a lot of people that contributed to what ultimately became the technology. There are four people typically credited with at least spearheading the concept that was developed by the US Department of Defense for military purposes. There is Roger L. Easton, the former head of Naval Research Laboratory’s Space Application was the brain behind a lot of the preliminary applications. Another name is Ivan Getting which contributed to the idea of using an advanced system of satellites to allow the calculation of data. Bradford Parkinson was at the forefront was also a chief architect of the technology. And then Dr. Gladys West also contributed to the advancements of calculations for an accurate model.

GPS stands for Global Positioning System and today this system has become quite sophisticated that it allows us to find addresses that might seem otherwise hidden or in the middle of nowhere. GPS uses signals from satellites to pinpoint a location on the Earth’s surface. GPS will use at least 24 separate satellites in a system that consists of six earth-centered orbital planes.

The Main Uses of GPS & How They Help Land Surveyors

How did GPS make its way into land surveying?

Because land surveyors are essentially marking and measuring terrain and property, GPS was a natural for the industry. The use of technology in surveying was one of the first commercial adaptations of GPS technology. GPS survey equipment allows the ability to obtain location, distance, and height almost instantaneously.

There are some pros and cons, however, when it comes to using/depending on GPS for land surveying. The benefits include:

There are also some slight disadvantages. These might include:

As GPS evolves, of course, land surveying will likely benefit and only increase its efficiency and accuracy. Already, in the last decade there has been quite a lot of changes in the way that land surveying is done, thanks to new equipment and improvement of techniques.

Get Accuracy with Land-Mark Land Surveyors

Just like any other industry in the 21st century, land surveying continues to change and advance as technology does the same. Here at Land-Mark, we do the job right. We use top-of-the-line equipment and the best techniques to ensure an accurate reading.