The Mapmakers of History: How Charting our World Became Essential for Civilization

Is a perfect map possible? For those of us who frequently use our smartphones to find our way around with no wrong turns, the answer might seem like a resounding yes. And yet, map makers and experts contend that there is no such thing as a perfect map. One expert claims that all maps are—to some degree—subjective and that all civilizations in the past have heralded their maps as the correct one when really each one depicts a subjective view. And yet, companies like Google have set on a quest to develop “the perfect map,” using every available tool to approach this much-romanticized perfection. Through satellite imaging, drone images, hikers, and more, Google is attempting to create the perfect picture of our world.

Over the centuries, human beings have engaged with the environment in an effort to better understand it and advance their societies. So here is the story of a few maps that changed the world.

The Early Days of Maps and How It Altered Human History

You may have heard someone say, “so-and-so has a good sense of direction.” Perhaps we recognize that some people are more apt in finding their way around than others. What is this about? Since the 1940s, some scientists have argued that humans have a kind of internal map or “black box” in the nervous system. While this may be true to some extent—we know how to get around our neighborhoods or familiar towns—drop someone in unknown territory and things can go south very quickly.

Yet, humans used this intuition to begin interacting with the world and trying to document it. One of the oldest surviving maps was a clay tablet created around 700 to 500 B.C. in Mesopotamia. This early map was small and primordial, as it was more about giving people a sense of the surrounding worlds by placing Mesopotamia at the center.

Early maps, in fact, were not overly concerned with accuracy. These early representations were more of a form of artistic expression or representing one’s fiefdom or kingdom. Some experts point to the early Roman maps, which seem to be more of a statement or showcase of their great empire than a document meant for navigation or understanding the land.

The First Attempt at Accurate Mapping

The first step towards accurate map-making was due to one man seeking to craft accurate horoscopes. One of the most often cited early maps was from Claudius Ptolemy, an astrologer and astronomer, who was preoccupied with horoscopes and somewhat inadvertently invented geography.

Ptolemy did the leg work to collect documentation that detailed locations of towns and used stories from travelers to embellish his maps. He slowly developed what became a system of lines—latitude and longitude—and drew out almost 10,000 locations. He also knew that it was necessary to have a 2-dimensional map even knowing that the world was round.

Other Notable Maps of the Ancient World

After Ptolemy’s creation of geography, other societies also attempted to depict the world around them in a way that made it possible to understand and engage with. Some of the early maps that changed civilization are detailed below.

This early Arabic-language geography guide drew on Jewish, Greek, Christian, and Islamic traditions. According to the Atlantic, early Muslim mapmakers had a tradition to put the south on top. This early map depicted blue seas surrounding the globe and was more concerned with accuracy without embellishments, monsters, or overly artistic additions.

Another early map shows how Christians in medieval Europe saw the world. This map used biblical time as the main running theme, with a depiction of Christ looking over the entire globe. In the map, towns and cities are depicted while also showcasing biblical moments and places such as the Garden of Eden, Pillar of Hercules, a crucifix, Jerusalem in the center, and a representation of Africa, embellished with monsters.

Many experts say that this map, created by Gerardus Mercator, is one of the treasures of early maps. He attempted to mimic the curvature of the earth’s surface on a 2-dimensional representation. The image of this map shows that it was created for European navigators. Experts discuss the artistry of this map, as it represents some political conflicts from a distance—as if to suggest the minuscule nature of man compared to the incredible vastness of the world around us. It was this type of subjective representation that makes early maps a majestic historical document that speaks volumes about society at that moment in time. 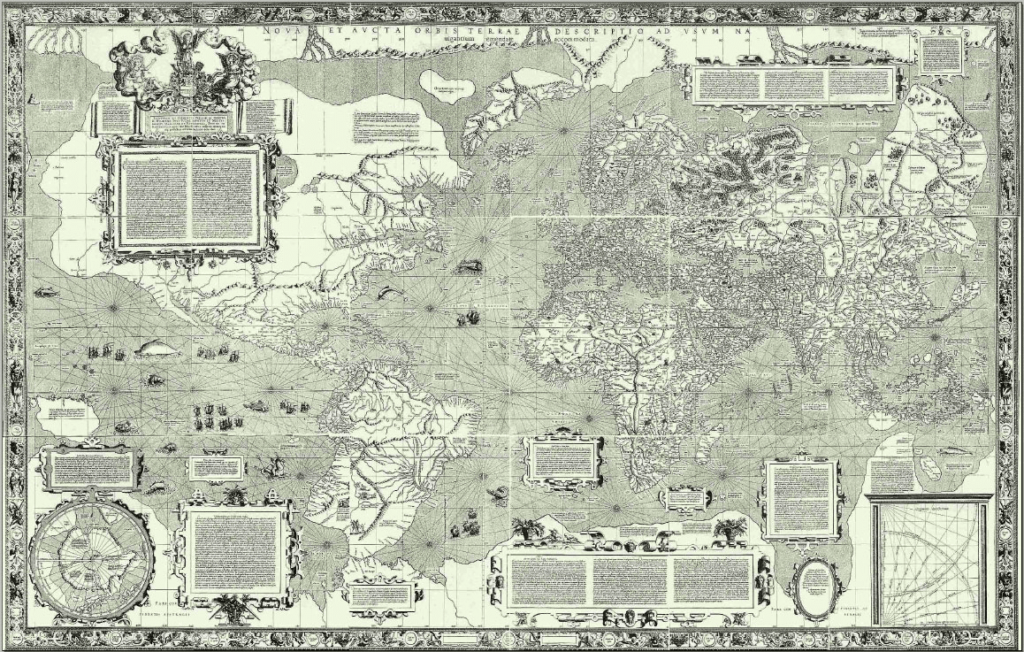 Notable Cartographers the Helped to Build the Mapping Tradition

Early mapmakers had limited tools at their disposal but they managed with their early understanding of the cosmos, compasses, and zenith telescopes. Early cartographers then depend a lot on their imagination and their limited knowledge.

Mauro was a 15th-century Camaldolese monk who had a cartography studio in Venice around 1450 AD. His map is often considered one of the most well-known and beautiful pieces of medieval cartography.

Mercator’s map was mentioned above. In fact, Mercator may be a recognizable name to many. The Mercator map projection is named after this map maker. This was created as a navigational tool in the 1500s. It was Mercator’s attempt to accurately depict the Earth’s curvature and taking that into consideration for navigation that put his name on the historical roles of map-makers.

Land Surveyors, The Modern Map-Makers Working to Map Our World

The above is only scratching the surface of the amazing history of map-making and cartography. Today, we have amazing technology helping improve the process. Of course, maps and our interaction with them have changed considerably today. As Google attempts to find the “perfect map” land surveyors across the globe continue to do their job of measuring landmasses and establishing property lines, boundaries, etc.

Do you need property demarcation or a land survey of your property? Want to learn more about what we do? Connect with us at Land-Mark Land Surveying today.