Trying to prove that a certain piece of land is yours, can be easier said than done. Especially if you have another party claiming that the land belongs to them. One way to settle such a dispute is to have a survey of the lands done. Land-Mark Professional Surveying has experience in performing boundary surveys El Paso. Land surveys are helpful with marking out the land. This can help settle any disputes that may be happening. In addition to this, it will provide accurate and legal documentation to prove ownership.

Using boundary surveys in El Paso can help to settle land disputes. A land dispute is when you have an issue regarding ownership. Now it may seem like it would be obvious as to who owns what land. But land can change over time. For example, certain hills and valleys that existed fifty years ago are no longer around. Or a city can build or destroy property. This too can change the way land looks and where it is marked. As a result, land owned by an individual can look like it is owned by another. This is where a survey can help. If one person claims that a piece of land is theirs. And another person also claims that land. Then the way to settle it is to check the boundary lines. This will be the most accurate and speediest way to define who owns what.

Using boundary surveys in El Paso can help prove ownership. It sometimes happens that over time, who owns what land can be difficult to see. A survey marks the land space that a person owns. This info is taken from original land deeds. Every time someone makes a land purchase, it comes with a bit of land. This info is recorded in the deed. A survey takes the measure of the land based on that survey. As the deed is also fairly specific, say 24 by 20, it cannot be altered or measured incorrectly. In other words, the survey cannot take a measure of the land as 25 by 19. It must be to the specified measures found in the deed. This way, it is practically impossible to get ownership wrong.

Figuring out who owns what land, or has a right to that land can be tricky sometimes. Land tends to change over time and it sometimes happens that boundary marks get confused. Getting a survey done on property helps prove ownership. Land-Mark Professional Surveying can perform quality boundary surveys El Paso. This is helpful in settling any disputed land and gaining papers to prove it. Getting a boundary survey done provides legal documentation to prove ownership. If you are having an issue with proving certain lands belong to you, then consider getting a survey done. This is usually the fastest and easiest way to settle the matter. 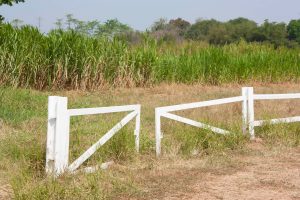 As the name suggests, a boundary survey in El Paso can clearly mark where your property ends and your neighbors begins. At Land-Mark Professional Surveying, Inc. we can provide such services to a property owner. This is a professional and accurate way of determining rightful boundary lines. Boundary surveys help settle disputes of other types as well, including some of these examples below.

A boundary survey in El Paso is an excellent way to determine where you can build on your property before the work even begins. Spacious backyards are great to have but can sometimes become a source of complication when the boundaries are not so clearly set as with other types of homes. In this case, you would be better off having boundary surveys conducted before any additions are made to the property. The limits of the property you have is also important to know when you are planning to pass on your estate to a loved one after death. Professionals in the industry use metal bars to mark property lines and this is generally considered irrefutable legal proof.

It is also a useful document when you go to sell your property because it saves any potential buyer the anxiety of wondering where the property lines are. You will know exactly what is and is not included in the purchase.

At Land-Mark Professional Surveying Inc., we understand all of the latest techniques when it comes to professional boundary surveys and other types of land surveying. A boundary survey in El Paso can be easily conducted and recorded for complete accuracy for legal and personal reasons. If you are considering a land survey of any kind, then contact us today!